The probabilistic multi-model ensemble prediction system used at WMO LC-LRFMME is based on an uncalibrated MME with model weights being inversely proportional to the random errors in the forecast probability associated with the standard error of the ensemble mean (i.e., proportional to the square root of model ensemble size), and a Gaussian fitting method for the estimation of tercile-based categorical probabilities (Min et al. 2009). 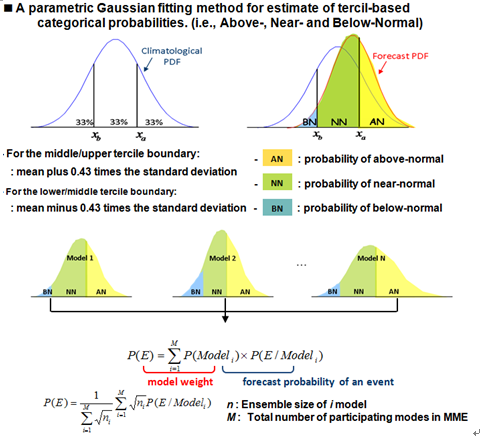 Where P is a forecast probability,

is the i-model, and Mis the number of models. In this equation, P(

) is a forecast probability of the event conditioned on the i-model (i.e., the imodel forecast of j-event). M(

) is an unconditional probability of the model, which is a model weight in this context. Here, we assign the weight proportional to the square root of the model ensemble size

, . Taking into account that model weights must sum up to one, the final forecast formula for each j-event is as follows .